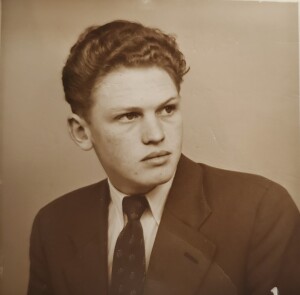 In Loving Memory of Arne Brix

It is with heavy hearts, that our family announces the passing of our father Arne Brix, on July 4, 2022 at the age of 85, after a brief battle with cancer.

Arne was born in Randers, Denmark.  As a young boy, he witnessed the occupation of his country.  At 19, he boarded the RMS Ascania, bound for Halifax.  Once in Canada, he travelled by rail to Kamloops, BC., where he joined a fellow Dane, who was farming on the Frolek Ranch.  Arne worked on the ranch for several years and learned the finest English from the cowboys.

He married Nadine and soon relocated to Nanaimo, BC with the girls. He worked in the construction industry at Stuart & Hudson, started his own carpet store, and eagerly built a twelve unit apartment, The Viking Manor.  In 1976, he bought a farm on Cranberry Avenue and when he received his citizenship, he held a barn dance. Family and friends came from Denmark to celebrate with him.

Arne had a passion for working, building, creating, & inventing. His mind was always thinking of his next venture. Some projects included duct tape. He was always willing to help his family and friends with challenges that were faced, whether it was a flat tire or a quart of milk.

Arne relocated to the Parksville area in 1989, as his business moving houses was very busy in the Errington & Coombs district.  He developed his parcel of land near Trees Restaurant by relocating part of the Snow White Motel. The land soon became known as Arnesville. A few years later, he barged duplexes from Vancouver and those added to his little community.

When Arne wasn’t working, he could be found at a dance hall. He had a love for good music and dancing. He was a proud member of The Moose Lodge, The Danish Club and The Legion.  He also took up collecting donkey memorabilia, where his collection exceeded 200 donkeys.

Our family would like to thank the Palliative Home Care Team and our private nurses, Sam, Barb & Ashley.  Your dedication and compassion allowed our father to be surrounded by loved ones and pass peacefully at home.

Our family would like to thank the Palliative Home Care Team and our private nurses, Sam, Barb & Ashley.  Your dedication and compassion allowed our father to be surrounded by loved ones and pass peacefully at home.

Please join us for a Celebration of Life, dancing, lunch and stories on July 30 @ 1:00 pm at The Parksville Legion.

In lieu of flowers, please donate to The Parksville Legion, or a charity of your choice.